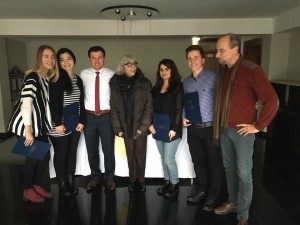 Members of the Kosovo Institute of Intellectual Property Institute took part as researchers and interpreters at a Study Visit on Geographical Indications in Kosovo organized by the Ministry of Trade and Industry, Ministry of Agricultural and Rural Development, Agency for Food and Veterinary, AgroParisTech, BioDivBalkan Project, and the French Embassy.

Our members, Dea Ismajli, Rita Paçarada, Erlinda Musliji and Dashnor Shala,  were led by the Director of the Institute Mr Veli Hoti and contributed to the French research group which was consisted of French Professors and Students.

The entire team worked on the Sharri Cheeser and other milk productions in order to draft the product specifications of Sharri Cheeser as a Designation of Origin in Kosovo.

This study visit was organized from 29th of February until 12th of March 2016.